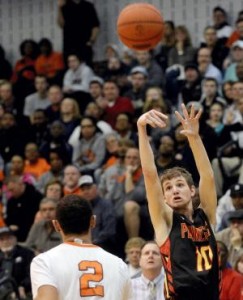 The problem was, Penncrest wasn’t quite ready for its Cinderella postseason to end.

But after the District Three champion Bearcats saw their 15-point lead dwindle to four, they held on for a 66-57 win against the 10th-place finisher from District One at Dallastown High School.

“Teams aren’t going to quit at this level,’ said William Penn coach Troy Sowers. “They are going to fight until the end. It’s win or go home. I credit (Penncrest) more than I can say our guys weren’t working for it.’

The Bearcats built a lead as large as 15 points in the third quarter only to see Penncrest senior guard Mike Doyle almost single-handedly will the Lions back into the game. The 6-1 Doyle connected on six 3-point goals and scored all of his game-high 24 points in the second half.

“Mike Doyle really put us on his shoulders there,’ said Penncrest coach Mike Doyle of his son. “He didn’t want to see his career end.’