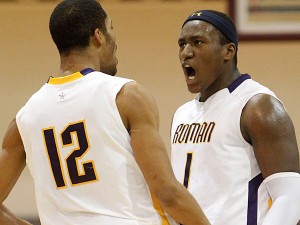 Roman Catholic coach Chris McNesby said he removed Manny Taylor from the starting lineup for a period to “motivate, not punish” the junior forward for a less-than-complete effort.

“We wanted him to be more of a power inside and on the glass,” McNesby said. “We expected more than three rebounds a game from him. We knew he could do better.”

Sunday afternoon at packed Philadelphia University, with an inspired Taylor scoring 20 points and collecting nine rebounds, the Cahillites, ranked No. 3 in Southeastern Pennsylvania by The Inquirer, upended No. 1 Archbishop Carroll, 54-46, in a Catholic League showdown.

Taylor, who rejoined the starting lineup last Monday against Father Judge, shot 8 for 13 from the field and 4 for 6 from the line. He added a steal and a blocked shot.