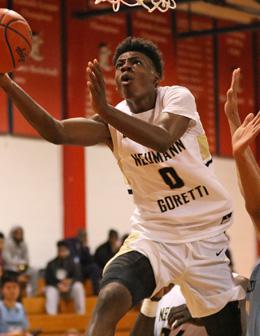 Christian Ings (above) and Neumann-Goretti clamped down on Archbishop Carroll in the second half to open PCL play. (Photo: Tommy Smith/CoBL)

Throughout the early season, defense has been Neumann-Goretti’s biggest weakness.

Although the Saints were off to a 5-3 start entering their Catholic League opener at Archbishop Carroll on Tuesday night, they’ve been held back by their defense — or lack thereof — to begin the second half of various games.

At a holiday tournament in Charlotte, North Carolina a week ago, the Saints held Asheville Christian Academy to 53 points in the first game, but then dropped two consecutive matchups to Lincoln (NY), and Providence Day, both games only losing by a combined 13 points.

“We have been stressing we were very poor defensively in parts of games in Carolina,” head coach Carl Arrigale said. “Our offense was good, but we didn’t dig in defensively.”

But in their first game back in the state and on the opening night of Catholic League play, the Saints looked just like their normal selves.

← Johnson, Ingraham control the lane as Bonner & Prendie notches win
No case of gym intimidation this time for Penncrest’s Norwood →