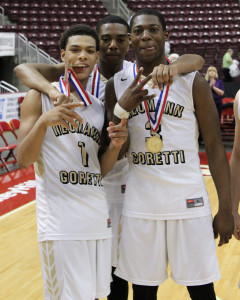 Sometimes you can play your best, and sometimes, you best can simply not be good enough.

The UNLV signee saved one of his best games of his career for last. He had 30 points on 13-22 shooting and 18 rebounds, but shot 4-of-15 from the line which would be the Patriot’s downfall to Neumann-Goretti.

The Saints captured their fifth state title in six years with a 69-67 win over Carroll.

“I gave it my all. Sometimes your all isn’t enough. My team needed me tonight to knock down foul shots, but they weren’t falling tonight. That’s just more motivation for me to go on to college and step it up,” a somber Jones said after the game.

Carroll shot 10-25 overall from the line, and Neumann-Goretti’s quartet of talented guards was just too much to deal with down the stretch. Junior Zane Martin led the Saints with 26 points, which ties his season high.  The three other guards that start with him all hit double figures as well; junior Vaughn Covington had 17, sophomore Quade Green had 14 and senior Lamarr Kimble had 10.