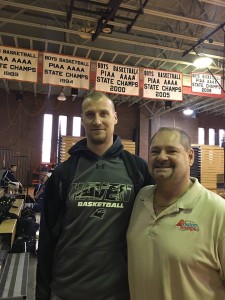 When Dave McFadden talked to his Strath Haven players for the first time late last spring, he wasted no time addressing the elephant in the room.

“Coach from the minute he came in said, I know what y’all did last year; we’re going to leave that in the past and start fresh right here,” point guard Jahmeir Springfield said Tuesday. “That’s one thing he emphasized.”

So in that spirit, let’s get the background out of the way quickly: McFadden’s first head coaching job was to take over a team that went 3-19 last season, 5-39 over the past two under coach Tom Dougherty. They endured a 19-game losing streak in the Central League around a winless league slate in 2013-14.

That history, no matter how maddening, was just that. There was no changing it, McFadden told his group. The only alternative was to prevent history from repeating itself.

One win at a time, McFadden’s bunch has suppressed any hint that this is substantially the same group that endured last year’s pains. That path leads them to Friday’s first-round District One Class AAAA contest in which No. 25 seed Hatboro-Horsham visits the No. 8 Panthers.

Webmaster’s note: If you can’t make the game, you can listen to it LIVE right here on Delcohoops.com.  Go to the broadcast by using the link on the left side of this page!