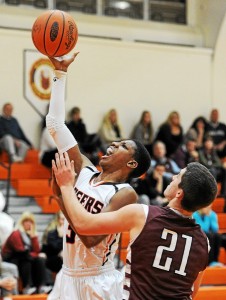 The cell on the scoreboard next to Nick Giordano’s No. 10 read “31.’ But that was the tip of the iceberg of the senior guard’s contributions Tuesday night.

Sure, Giordano’s third 30-point game since the start of last season was a big part of the Tigers 71-59 win over Garnet Valley in the Central League opener for both. But to think that was all he brought to the table is far from true.

And while it was Giordano’s offensive touch that sparked the Tigers (3-0, 1-0) to a 15-6 advantage in the third quarter that overturned a nine-point halftime deficit, his contributions elsewhere are what helped Marple get over the finish line with a win.

Giordano filled the stat sheet — six rebounds, six steals, most of them generating offense for himself or others, even two blocks. But it was the least quantifiable aspect of his evening — his ratcheting up of the defensive intensity in the second half — that really made the difference.

“When we went into halftime, we were pretty upset with our defense,’ Giordano said. “We knew we really needed to step up the defense. I came out and took it upon myself to lead by example and start upping my defensive pressure and trying to get the team amped up on the defensive end.