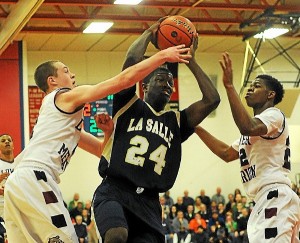 Despite some growing pains early in the season, La Salle has saved its best ball for the state tournament. Defending state champion Lower Merion was clearly the favorite going into the PIAA Class AAAA quarterfinals on Saturday, but that didn’t stop the Explorers from playing their best game of the season and booking a place in the final four.

La Salle dominated the first half and carried that wave of momentum to a convincing 71-48 thrashing of the Aces. Led by Shawn Witherspoon’s 17 points and a phenomenal rebounding effort, the Explorers came out hot and left Lower Merion a bit shell shocked.

By the time Lower Merion knew what happened, the game was essentially over.