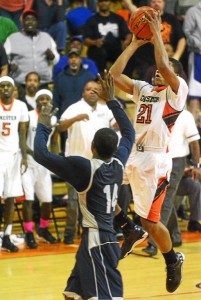 That’s one way to make an impression in your first home game, Mahir Johnson.

After Math, Civics & Sciences bricked a pair of would-be game-icing free throws, Tyrell Sturdivant collected the rebound and zipped a pass to Johnson, who dribbled to the top of the key and found nothing but net from 15 feet out to help the Clippers edge the Mighty Elephants, 62-61, in the marquee game of the Fred Pickett Classic.

Johnson, a transfer from Glasgow (Del.), finished with 15 points, while fellow Glasgow transfer Sturdivant collected his fifth straight double-double by virtue of his 21-point, 10-rebound, three-block effort for Chester (5-0).

Mahir Johnson is rushed by fans and teammates after shooting the game-winning basket for Chester Saturday. (Julia Wilkinson)

The Clippers trailed most of the game and the entire second half, but a 2-for-13 performance at the charity stripe from MC&S helped them stick around. The Mighty Elephants, the state’s No. 1-rated Class A team according to the Harrisburg Patriot-News, connected on only seven of their 20 freebies.