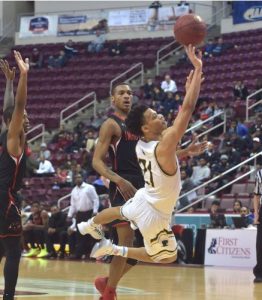 Throughout its run to the state finals, balance defined the Bonner & Prendergast offense. It wasn’t always Isaiah Wong or Tariq Ingraham, the two blue-chip headliners any opponent would list first on their scouting report, forced to provide most of the offensive production.

About the time that Wong, the reigning Daily Times player of the year, hoisted his second 26-foot 3-pointer of the third quarter for the trailing Friars Thursday, it was pretty clear that such balance had broken down. And as Bonner’s stars adhered to the extremes of the scoring spectrum, there was little that the Friars could do to dent Imhotep Charter’s dynasty.

Behind four double-figure scorers, the Panthers claimed their seventh state title in 11 seasons and third straight in Class 4A via a 67-56 victory in a whistle-marred final at Hershey’s Giant Center.

Wong did his part, with a game-high 29 points and seven rebounds. But he was one of five Friars to finish with four fouls each, as the referees lost the plot in the third quarter, whistling 11 fouls on Bonner in nine minutes, which robbed the high-flying rematch of the District 12 final from any sort of flow.

The raggedness was apparent early. The Friars (22-7) tried to force the ball to Ingraham in the post, but two first-quarter fouls meant he would have to sit for the last 10 minutes of the half.

“It was hard to establish a rhythm, everyone getting in foul trouble,” Wong said. “We were just trying to find another way to try to get a dub, but we couldn’t find another way today. I felt we did good as a team with the struggles we had.”