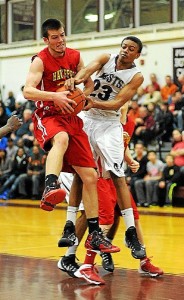 As many expected, Abington will get its chance for some revenge against Chester, the team that knocked the Ghosts out of last year’s District One playoffs.

A fantastic defensive effort from top to bottom helped the Ghosts to a 53-34 win over Haverford in a District One Class AAAA second-round game at Abington Tuesday night, moving the Ghosts to the quarterfinals for a meeting with Chester.

Led offensively by senior Anthony Lee and junior Matt Penecale, the Ghosts (21-3) held the lead from late in the first half until the end of the contest, handling No. 23 Haverford with ease while forcing turnover after turnover.