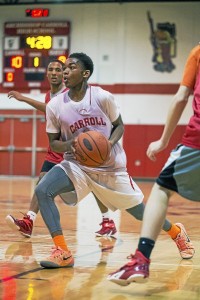 As Quade Green walked past his coach and out of the Neumann-Goretti locker room Friday night, Carl Arrigale paid him one of the most sincere compliments a dead-eye shooting guard can receive.

None of the members of the raucous capacity crowd at Archbishop Carroll’s gym that had just solemnly filed out were in any position to dispute that.

Green nailed a 3-pointer with 1.2 seconds left on the clock, leading the Saints to a come-from-behind, 71-69 win in a seesaw classic between the Catholic League rivals.

The Saints, who trailed by six at the half and as many as seven in the third quarter, came storming back to reassume the top spot in the Catholic League thanks to Green, who scored 13 of his 26 points in the fourth quarter, none bigger than the final dagger.

Arrigale, whose team had failed to convert on a similar end-of-game situation in a loss to Roman Catholic this season, let Friday’s play out when two free throws by Josh Sharkey with 10.7 seconds left nudged Carroll ahead, 69-68.

(click on this link for the full story and game video)