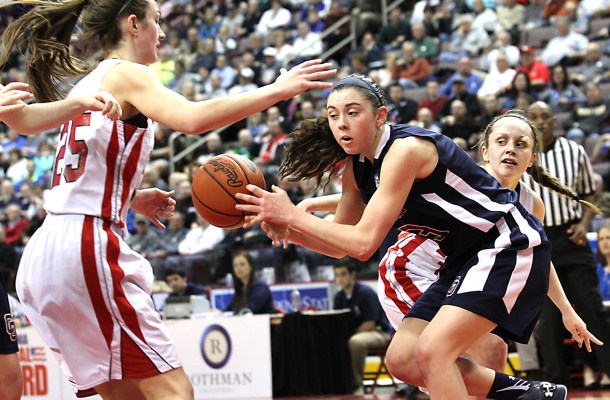 Mary Sheehan gazed down the court with a look of steely determination Friday night.

There were no tears, no sobbing, as you’d expect from a Cardinal O’Hara group that had marched to the PIAA Class AAAA final with a roster devoid of seniors, then ran up against the three-time champion buzzsaw that is Cumberland Valley.

But the intensity radiating from Sheehan’s visage was neither devastated nor angry. It was merely confident, as she and fellow junior Hannah Nihill shifted under the weight of the PIAA runner-up trophy they’d just been presented.

“I said to Hannah, ‘That’s going to be us. I want that to be us,’” Sheehan said after O’Hara’s 57-34 setback at the hands of a dominant Cumberland Valley squad. “And she agreed that’s what we want.”

If Sheehan needed a mirror to reflect her feelings, it stood 60 feet down the court, having a third gold medal in as many years draped around her neck. For the three seniors on Cumberland Valley’s squad — including two-time state player of the year and Friday’s MVP Kelly Jekot — the championship journeys began with loss.

Jekot, who scored 28 points to go with seven rebounds and four assists in a phenomenal performance, reminisced to a formative juncture in the Eagles’ coalescence into a state champion: Losing to Spring-Ford on the Giant Center court three years before.