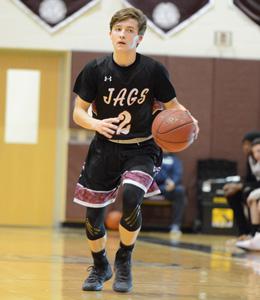 Carl Schaller (above) and a junior-heavy Garnet Valley look like a factor in the Central League. (Photo: Josh Verlin/CoBL)

And while the Jaguars have been plenty successful in the meantime — ripping off six straight victories by an average margin of more than 20 points —  that 69-56 loss at Lower Merion still eats at them.

“We didn’t have a good night,” Garnet Valley coach Mike Brown said of that Dec. 17 matchup. “To be honest, we haven’t talked about it much. … In this league, you play a game every two days.”

For all the progress the Jaguars have made, going from 8-14 five years ago to double-digit victories each of the past four seasons, Garnet Valley is still looking to get over that Central League hump and win a title for the first time since joining the league in 2008.

To do that, it almost certainly means getting past the Aces, who have captured five of the past seven Central League crowns and beaten the Jags in the six games since guard Carl Schaller arrived at Garnet Valley.