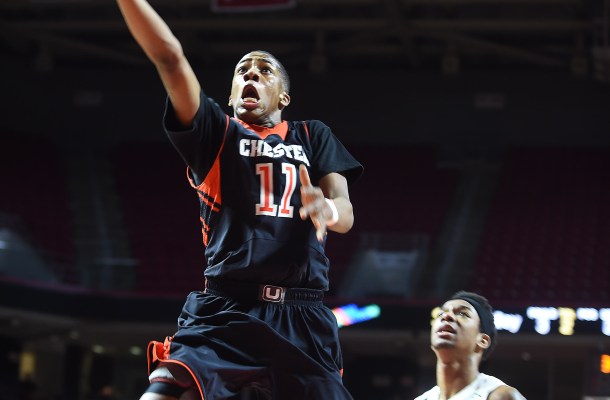 Stanley Davis Jr., one of two Chester players to record a double-double, drives for a basket in the third quarter of the Clippers’ 74-62 win over Ridley in Tuesday night’s District One Class AAAA semifinal at Temple University’s Liacouras Center. (Digital First Media/Pete Bannan)

Without Khaleeq Campbell, who tore his ACL at Widener University Dec. 29, 2014, the Clippers were a rudderless ship, lacking a vocal leader and the true point guard to orchestrate an arsenal of talented but youthful talents needing on-court stability and direction.

Fast forward to the present — to a Chester team a day from renewing acquaintances with PW in Friday’s District One Class AAAA title game — and having Campbell sit the bench for foul trouble or a brief rest still isn’t viewed as ideal. But where last year Campbell’s absence invited chaos, this year, it’s just another sub in the 12-man rotation.

One major reason for that shift is Stanley Davis.

Davis’ ability was on full display Tuesday in No. 9 seed Chester’s 74-62 handling of No. 4 Ridley in the semifinals, powered by Davis’ 16 points and 10 rebounds. The game pivoted on a 10-4 run to finish the first half (part of a 19-6 spurt bridging the interval) that turned a tight game into one where Chester never trailed by fewer than eight. Davis fueled the distancing as Campbell sat with two fouls in a whistle-marred first stanza.

“Right now, he’s playing a little bit better with his head than with his heart, because he’s a Chester guy,” coach Larry Yarbray said. “He’ll give you 120 percent. He’s going all out, he wants to win so bad, he’s trying everything, and sometimes he tries to do it by himself. But he’s slowing down a little bit and making good decisions.”