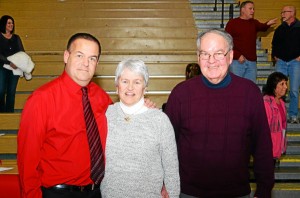 In the 17 months since his diagnosis of stage 3 brain cancer, Brian Donoghue has experienced a multitude of generosity sent his way.

He’s seen the King’s College athletic department, where he continues to serve as the women’s basketball coach, work tirelessly to spread the message of awareness for his condition and raise money for his medical expenses via a number of charitable events, cutting across sports and seasons.

He’s witnessed many former opponents through a decade on the bench undertake similar fundraising measures. And Donoghue was the beneficiary of an online campaign associated with the Scranton Half Marathon that raised $7,500 (beyond the goal of $5,000) for his family.

Of all the charity dates dotting his calendar, though, there’s one that holds the warmest place in his heart: Saturday’s Play for Gray Coaches vs. Cancer Classic at his alma mater, Haverford.

The reason isn’t the money or awareness raised — both of which are substantial — but the fact that it brings him into contact with the Delaware County athletic community that he is so fond of. It presents him a chance to come home.

“I’m very blessed and very lucky, and it just speaks about Delaware County athletics,’ Donoghue said Saturday evening, as he watched the Fords take on Bonner-Prendergast. “It’s a unique animal.’