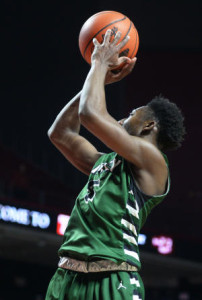 Ridley’s Brett Foster goes up for a shot during the Green Raiders’ loss to Plymouth-Whitemarsh, 44-41, in the District One Class AAAA semifinals at Temple’s Liacouras Center. (Tom Kelly IV)

Already having reaching the Final Four of the District One Class AAAA tournament, the Green Raiders were about to reveal whether they were there by accident, by skill, by good bracket fortune or some of each. Yet there was also the risk that as the No. 9 seed in the tournament, facing fourth-seeded and 24-2 Plymouth-Whitemarsh, that they would prove they did not belong at all.

But then Julian Wing buried a 3-pointer to force a tie at halftime, and then the Green Raiders rallied from four points down in the final minute to have two late chances to win, and then, both results were validated. Plymouth-Whitemarsh, yes, was the better team, winning, 44-41, to reach the tournament final. And Ridley, though redirected into a Friday consolation game at Pennsbury, would be a worthy, if not a dangerous state-tournament participant.

“We’d won five playoff games in a row,’ Green Raiders coach Mike Snyder said. “And we were a hair from winning a sixth one to put us in the finals. That was a great effort from our kids. They did everything they could. There are no regrets.’

There should have been no regrets, not when Ridley’s good-look three-pointer failed at the horn. At 22-5 heading into the game, the Green Raiders were about even all night with P-W. The differences, if any, were slight. The Colonials shot a bit better from distance, draining five 3-pointers to Ridley’s two. And the Green Raiders had, as Snyder pointed out, a couple of “in and out 3s’ that in a one-possession game will make the difference. Plymouth-Whitemarsh did not allow many second shots. But on another night, and in Pennsylvania high school playoffs that’s forever possible, the result could have been flipped. So Plymouth-Whitemarsh won the game. And the Green Raiders won this: The knowledge that they will be ready for whatever hits them.