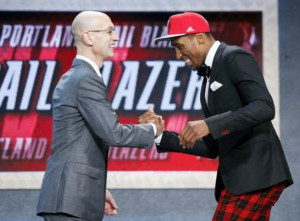 The crowd in Sections 225 and 226 of the Barclays Center roared its approval as NBA commissioner Adam Silver announced that the Portland Trail Blazers had taken Chester All-Delco and Arizona product Rondae Hollis-Jefferson with the 23rd pick in the first round of the NBA Draft Thursday night.

That group, all 54 of them from Chester, were there thanks to Hollis-Jefferson as part of an essay contest he and his family sponsored, and they made sure they showed their appreciation to their native son.

But he wasn’t the property of the Trail Blazers for long. Portland dealt the Chester product to Brooklyn as part of a four-player deal. The Blazers acquired center Mason Plumlee and shooting guard Pat Connaughton in exchange for Hollis-Jefferson and guard Steve Blake. Connaughton was the Nets’ second-round pick, the 41st overall selection.