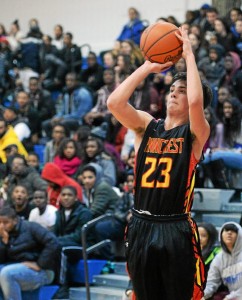 A mere glimmer of a dream back in third grade became reality for the senior leaders of the Penncrest Lions. “It just makes everything worth it,’ a glowing Mike Doyle said. “Since we were little, it was a goal.’ Behind the red-hot shooting of Nolan Carroll, Penncrest beat Academy Park, 49-37, Tuesday in a District One Class AAAA Tournament playback. The victory clinched the Lions’ first trip to the PIAA Tournament since 2010 and made a childhood dream a reality for this senior-laden squad. Playing together since they were young, with Mike Doyle coaching his son and his friends, these Lions imagined this night. They imagined winning the Central League and winning districts. Neither of those things happened. But the ultimate goal — a state berth — did.

“It’s something you talk about and you talk about. It’s an ultimate goal,’ the elder Doyle said. “It’s just an unbelievable (accomplishment) for a 28 seed — and we thought we were better than that.’ After three victories in this tournament, all on the road, two in overtime, all against higher seeds, clearly, they are. Tuesday, the Lions did it behind a lights-out performance from Carroll and 12 key points from big man AJ Taylor. Carroll sunk six 3-pointers en route to a season-high 23. He hit three of those treys during the second quarter, turning a 9-2 first quarter deficit into a 20-13 halftime lead. He hit three more during the third quarter, giving the Lions (16-10) a 14-point advantage entering the final period. Carroll had been ice cold lately. In his last five games, he was averaging a mere 6.6 points. He had just two 3-pointers in that span, compared to 59 in the previous 20 contests. Tuesday was a completely different story. (click on this link for the full story)