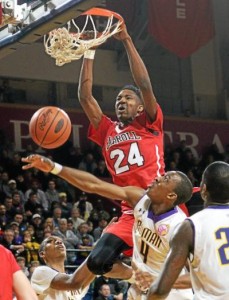 Archbishop Carroll’s Derrick Jones jams home a rebound over Roman Catholic’s Nazeer Bostick during the Patriots’ 61-58 loss in a Catholic League semifinal game Wednesday at the Palestra. Jones had 23 points and 14 rebounds, but it wasn’t enough for Carroll to overcome the Cahillites. (Tom Kelly IV)

For one day, one lousy day, Paul Romanczuk wouldn’t have minded seeing the dying entity of a multi-sport athlete be completely dead.

That day was the one where his Archbishop Carroll boys basketball team had to face Roman Catholic in the Catholic League playoff semifinals, and the athlete he would have liked to see stick to football when the teams arrived at the Palestra Wednesday was Manny Taylor.

The 6-5, 290-pound Rutgers-bound lineman came off the bench when Roman spent most of the first half getting outplayed by Carroll and made it nearly impossible for the undersized Patriots to grab a defensive rebound. Taylor’s tip-ins and soft, sure hands for a Mack truck of a young man allowed the Cahillites to overcome a couple of double-digit deficits and eke out a 61-58 win to advance to the championship game.

Taylor had 10 points and 10 rebounds, six of those coming on the offensive glass, where he would softly send home tip-ins, or direct a rebound to an open teammate for a second-chance bucket. Roman had 22 second-chance points, a saving grace after it missed 13 of its first 14 field-goal attempts.