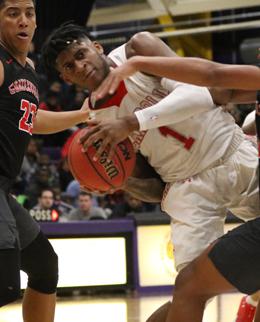 Keyon Butler (above) led Carroll down the stretch in a win against La Salle. (Photo: Josh Verlin/CoBL)

Archbishop Carroll senior Keyon Butler describes himself as a “second half guy”.

“When the game needs that energy that’s the boost I’m gonna give our team to get over the hump,” Butler said. “I know sometimes we might lack a little energy, confidence, that’s what I’m here for.”

The 6-foot-4 forward’s late game boost was a saving grace for the Patriots on Friday night when they were locked in a tie game with La Salle on the road with 55 seconds to play. Butler went to the line shooting one-and-one. He sunk both.

Twenty-five seconds later. Butler drove to the lane, pump faked and shot, drawing a healthy amount of contact. After a brief discussion, the referees ruled a goal tend and a foul. Butler completed the three-point play at the line, putting Carroll up by five.

The Patriots held on to the lead and beat La Salle, 57-54. Butler scored seven of his 11 points in the fourth quarter to go along with four rebounds, an assist and a steal.