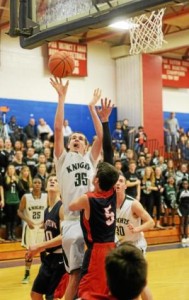 Delco Christian’s Grant Fischer, 35, gets off a shot over Jenkintown’s Andres Madden during the Knights’ 50-41 victory that earned them a District One Class A title Saturday. (Tom Kelly IV)

With leading scorer Devin Hill ineligible and second-leading scorer Wyatt Harkins mired in foul trouble, the spotlight for Delco Christian in Saturday’s District One Class A title game naturally could’ve been cast on Danny Browne to carry the load single-handedly.

The fact that the scoring burden wasn’t solely heaped on Browne’s shoulders is precisely why he and his teammates carted a trophy home with them.

Browne led the way with a game-high 20 points, but the Knights got contributions from up and down a roster burdened by absences and foul trouble to book a 50-41 win over Jenkintown in the Class A championship at Colonial Elementary School.

The title is Delco Christian’s first since 2006 and second all-time. Both teams had already clinched berths in the PIAA Tournament.

An entertaining, but foul-ridden first half made for grim reading for Delco Christian. Harkins had three fouls after one quarter and played barely more than 12 minutes before fouling out with six points and a mere two field goal attempts. Big man Grant Fischer was primarily a spectator with two first-quarter fouls.

Add to the equation that Hill didn’t make the trip, nor did senior depth forward Kaleal Tucker, whose minutes would’ve been valuable in Saturday’s whistle-happy atmosphere, and the game could’ve gotten away from DC (14-13) quickly.

Enter Browne, who had nine points in the first half, leading the Knights into the break up, 25-21.