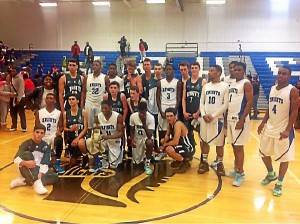 Members of Academy Park’s basketball team pose with players from Trinity Grammar School, a team from Sydney, Australia, that played the Knights Dec. 12 as part of a three-week, 11-game tour of the United States. (Courtesy photo)

There was an unfamiliar name on the schedules of several Delaware County boys basketball teams last week, a matchup that became a more memorable experience than your run-of-the-mill, December nonleague game.

Teams from Cardinal O’Hara, Interboro and Academy Park tested their mettle against Trinity Grammar School, a boarding school from Sydney, Australia, in the midst of a three-week tour of America.

The trip is a regular occurrence for Trinity, an Anglican school for boys located in Summer Hill, about eight miles outside of downtown Sydney, from where most of the students hail. Every three years for the last 15, the school has made the sojourn across the Pacific for a basketball tour to expose their kids to new experiences on and off the court.