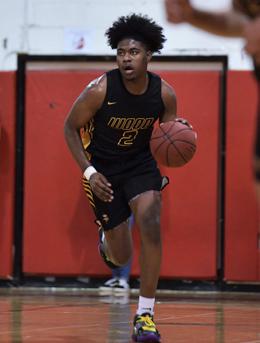 Marcus Randolph (above) has fit in well with the rest of a talented Wood junior core this season. (Photo: Mark Jordan/CoBL)

At the end of each day, Archbishop Wood coach John Mosco and Marcus Randolph hop in the car together.

The two make the trip from Warminster toward Randolph’s hometown of Willingboro, N.J., meeting Randolph’s dad in between.

And during those 45-minute car rides, Mosco has learned more and more about one of his many junior standouts.

But Mosco was still waiting for that breakout performance, a game in which Randolph showed out for a full 32 minutes. Friday night, that game happened.

Randolph ignited the Vikings with seven of their first 12 points and scored 18 — one of four players in double figures — as Wood rolled past Archbishop Carroll 80-61 on the road. Despite a four-plus minute scoreless drought at the start of the third quarter, the Vikings closed strong to pick up their 10th Catholic League win of the season and remain just a half-game behind first-place Neumann-Goretti.