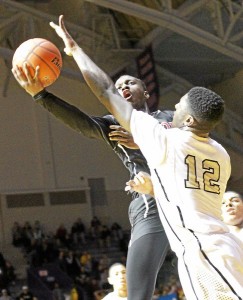 The breakdown of the result for Archbishop Carroll Wednesday wasn’t as bleak as the scoreboard would indicate.

The No. 3 Patriots won the battle on the glass. They limited the damage done by Miami commit Ja’Quan Newton, at least as much as the contributions of a player of his caliber can be minimized.

But the thing about a team as strong as Neumann-Goretti is that you can take away one or two things, but shutting the Saints down completely, well that doesn’t happen very often.

With all other avenues blocked, the Saints nailed eight 3-pointers, leading them to a 67-62 win over Carroll in the Catholic League semifinals at the Palestra.

The win sets up a rematch between No. 2 Neumann and top-seeded Roman Catholic, which downed No. 4 La Salle, 52-45, in the other semifinal.