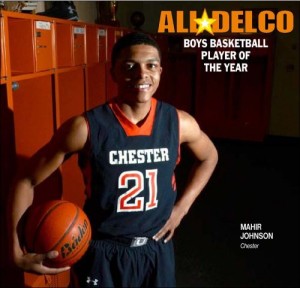 Being the son of Mike Johnson meant a lot was expected of Mahir Johnson in the city of Chester.

It meant trips to the gym for workouts and drill sessions at age 5. It meant trying to keep up with the moves his father could pull off on the basketball court. It meant the lore of Chester basketball was a ubiquitous facet of family conversation, the achievements and trophies won by Mike making for tales of encouragement from a young age. It even informed the name choice for Mahir, Arabic for “skilled,” by Mike, who converted to Islam later in his life.

And, once Mahir was old enough to realize it, that legacy entailed a destiny, an inescapable pull for the younger Johnson to someday return to his roots in Chester. Even though the elder Johnson wasn’t there to instruct any longer, the honor of playing his senior season at Chester High after three successful years at Glasgow in Delaware was a dream Mahir Johnson always harbored.

“I always wanted to come back and play for Chester, play where I’m from,” Johnson said. “I was already comfortable with the coaching staff, it was an easy decision.”

“It’s always discussed,” Johnson’s mother, Almika Purnsley said. “… Before he passed, Mike always talked to Mahir about what he achieved at Chester High. He always showed him the trophies that we had in our old house. It was like a dream of his to play for Chester.”

(click on this link to go to the full story)