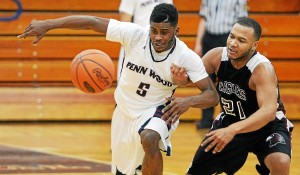 Thanks to injuries, the second half of a bright-starting season hasn’t gone to plan for Chichester.

The Eagles can take solace in the fact that a plan breaking down last Tuesday in the waning seconds against Interboro still yielded the desired results.

With four seconds left in a tie game between teams seeking their first Del Val League win of the season, the play Chichester coach Buzz Wood drew up was designed to go to Jamai Womack in the paint.

Instead, the play ended with Shah Ahmed burying a 3-pointer from two steps inside the halfcourt line, sending Chi to a 57-54 win.

“It really wasn’t planned for me to get the ball,’ Ahmed said this week. “Coach drew up play to Jamai (who had 17 points that night), and I was supposed to throw it down to him. It didn’t work out, and I just went up the court with the ball. I knew if I got past halfcourt, I had a chance.’

The shot left Wood a little shocked, in a good way.

“I’ve seen him do it in practice a lot,’ Wood said, “but not where he shot it from.’