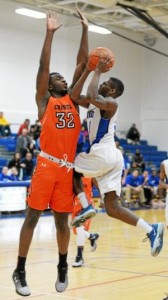 Academy Park’s Travis Smith, right, goes up for a shot under the defense of Chester’s Maurice Henry in the first half Wednesday. The Knights scored a 51-48, buzzer-beating win. (Tom Kelly IV)

Against Chester’s rangy lineup, went Brydges logic, the diminutive Covert just wasn’t the right fit. He reasoned that the backcourt pairing of Covert and Jawan Collins was too short to see contend with Chester’s lengthy 1-2-2 press and fire the over-the-top, pressure-relieving passes his team needed.

But when Henson fouled out with 1:28 left, there was no choice but to turn to Covert. And the Knights were certainly grateful for that.

The junior, who entered the game for the first time in the final minute, played the hero, hanging in the air to bank home a buzzer-beating, pump-faked 3-pointer as Academy Park scored a historic win over Chester, 51-48.

“I just threw it trying to hit the backboard, maybe it would go in,’ Covert said. “And it did.’

← Ahmed showed he has range to boost Chichester
Jackson, Smith both reach 1,000 points in wins →